﻿
Here we go with the 2nd recipe in our schedule-BROWNIES.  Not just any brownie-a Sweet and Salty Brownie,oozing  with caramel sweet stickiness. Brownies are delicious plain but dress them up with caramel and Fleur de sel-you get that ohhhh and ahhh taste explosion in your mouth. Dark decadent chocolate, buttery caramel and the taste of salt-add an ice cold milk chaser -perfection.
Brownies have been around for quite some time,however there is some debate about the origin. One thing for certain-they were as THE BOSS would sing " Born in the USA".  I'll bet he would love these.  I found some information at the web site "The Nibble"  and what they concluded was: "Culinary historians have traced the first cake “brownie” to the 1906 edition of The Boston Cooking-School Cook Book, edited by Fannie Merritt Farmer. This recipe contains two squares of melted Baker’s Chocolate and is a less rich and less chocolaty version of the brownie we know today. According to The Oxford Encyclopedia of Food and Drink in America, the proportions are similar to Farmer’s 1896 chocolate cookie recipe, but with far less flour and baked in a “7-inch square pan"

And did you know that Sears is credited with publishing the first known recipe in the 1897 Sears, Roebuck catalog.  Most sources say that recipe was actually for molasses candy. The candy was  called brownies. And that name "brownies" honored the elfin characters featured in popular books at the time by Palmer Cox.  The Eastman Kodak Brownie camera was also named after the elves. Somewhere along the line the "brownie" name became associated with these tasty morsels of chocolate.

Palmer Cox Brownie Illustration
courtesy of Wikipedia Commons
So the delicious morsels you are baking today were named after little elves-appropriate for the holiday season , don't you think ?

Make the Caramel
In a medium saucepan, combine the sugar and corn syrup with 1/4 cup water, stirring them together carefully so you don't splash the sides of the pan.  Cook over high heat until and instant read thermometer reads 350 degrees F, or until the mixture is dark amber in color (keep a close eye on the caramel at all times, as it goes from golden brown to black and burnt very quickly), 6 to 8 minutes.  Remove from the heat, and slowly add the cream ( careful, it will bubble up ) and then the fleur de sel.  Whisk in the sour cream. Set aside to cool.

Make the Brownie
Preheat the oven to 350 degrees F.

Butter the sides and bottom of a glass or light colored metal 9 by 13 inch pan.  Line the bottom with a sheet of parchment paper, and butter the parchment.

In a medium bowl,whisk together the flour,salt and cocoa powder.

Place the chocolate and butter in the bowl of the double boiler set over a pan of simmering water, and stir occasionally until the chocolate and butter are completely melted and combined.  Turn off the heat, but keep the bowl over the water of the double boiler, and add both sugars.   Whisk until completely combined and remove the bowl from the pan.  The mixture should be at room temperature.

Remove the brownies from the oven and sprinkle with fleur de sel and coarse sugar.

Cool the brownies completely before cutting and serving.

The brownies can be stored, tightly wrapped at room temperature, for up to 4 days.

Baked Note
Don't be tempted to add more than the amount of caramel called for in the recipe.  If you build too much of a caramel layer, it more than likely will seep out and burn during baking.  You can drizzle your leftover caramel on the brownie post baking if you are a caramel addict.
The Sweet & Salty Brownie is Baked's most requested recipe owing to the brownie's featured moment on the Food Network, where it was lauded with praise as one of the best salty  foods in the United States.
Brownies freeze well-allow the brownies to cool to room temperature.  Wrap them in two layers of plastic wrap-wrap the brownies directly as opposed to wrapping a pan of brownies. Place them in the freezer.

Unwrap and eat your brownies.

They should keep in the freezer for up to 1 month.

Posted by Roadtrek Girl at 6:19 PM

Email ThisBlogThis!Share to TwitterShare to FacebookShare to Pinterest
Labels: Sweet and Salty Brownie 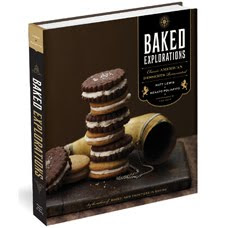